The last competition day brought the final matches and medal ceremonies. The accompanying program showed interesting roping down of the wheelchair brace participants from the Hotel Voroněž, as well as the sitting volleyball and boccia with paragolf.

Check out the video summary.

In the morning, the last races and matches took place at the sports venues in the five selected disciplines of this year's European Youth Games for the Disabled Emil Open. 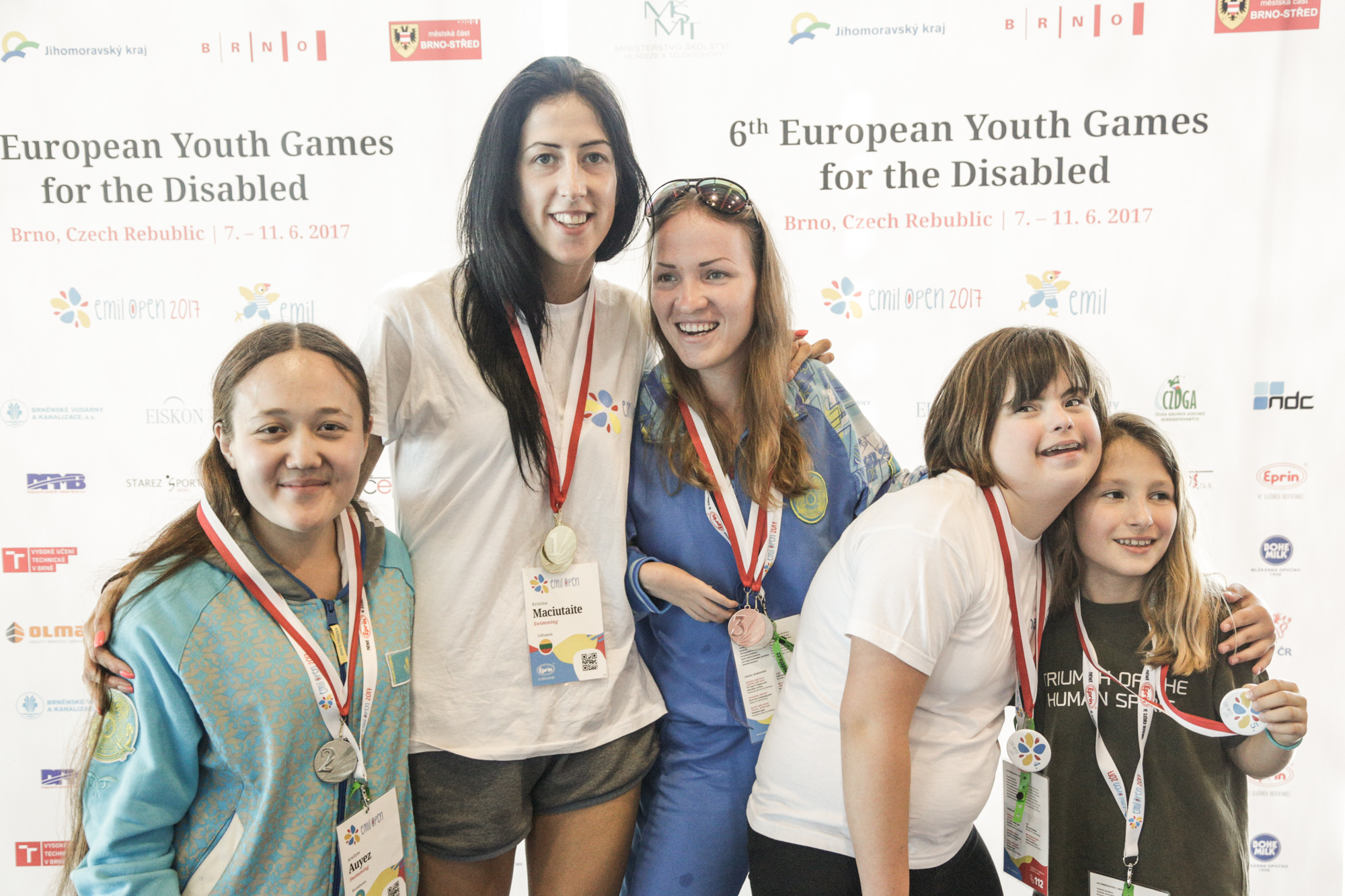 The most represented sport was athletics, which offered 10 individual events. Athletes measured their jumping power in long jump from the place or with the run up, at 50m, 100m, 200, 400 and 800 meters run, cricket throw with the150g and 350g balls and in a shot put. Amongst the most successful athletes were competitors from Lithuania, who took over not only long jump, but also the runs at 100, 200 and 800 meters.

Successful Czech athlete Kateřina Nováková planned to attack her personal record at Emil Open in the shot put. "Unfortunately, I was injured, so it was not ideal. But even so, I have fought and I'm happy with my performance," said Nováková, whose performance of 4.79 meters was a winning attempt in the wheelchair category. The Czech disabled competitor in the throwing disciplines is waiting for this weekend´s Czech championships.

The winner of table tennis in the Masters category was secured by the Czech representative David Půlpán, thus following a series of victories from previous years. He managed to win the European Youth Games for the disabled for the third time. He has gold in singles and two-man teams from the World Youth Games of the Disabled in 2016. The most popular category was the category of Open - Athletes with Mental Disabilities, which featured 25 participants. The winner of this category was Nikolas Daniel.

In the afternoon, the swimming competitions were also culminating in Kraví hora, and there were the final fight in less than twenty disciplines of the Masters category. Swimmers showed maximum performance in nearly summer weather and countless personal records fell. The podium of the winners was dominated by three states - Czech Republic, Lithuania and Kazakhstan.

Favorites did not disappoint the fans. Paralympic winner of Rio and world record holder Arnošt Petráček won the 50m backstroke in 44.5 seconds. "I'm glad I was able to improve in the final with almost a second. I enjoyed both days incredibly. The pool was very nice and with a friendly atmosphere. I did not feel any pressure even though the races were good," Petracek said. "In addition to the races, there was plenty of time left for fun. I became acquainted with a lot of new and interesting people. I enjoy most at these big events," he concluded.

The boccia discipline was divided into indoor and outdoor variants. The indoor contest, which was attended only by Masters athletes, was ruled by representatives of Russia. They not only won in all four categories, but in their style and form of play, they showed that they are among the world's top players in their sport. Other successful countries included Hungary, Croatia and the Czech Republic.

The last discipline that took place on Friday was golf. Two competitions took place during this year's Emil Open - on Thursday the participants measured their strengths in golf games made up of five different launches, on Friday at the Cascade golf resort, a performance tournament was held in which not only disabled but also healthy players were presented. Both contests have been won by the Briton Ashley Harris. 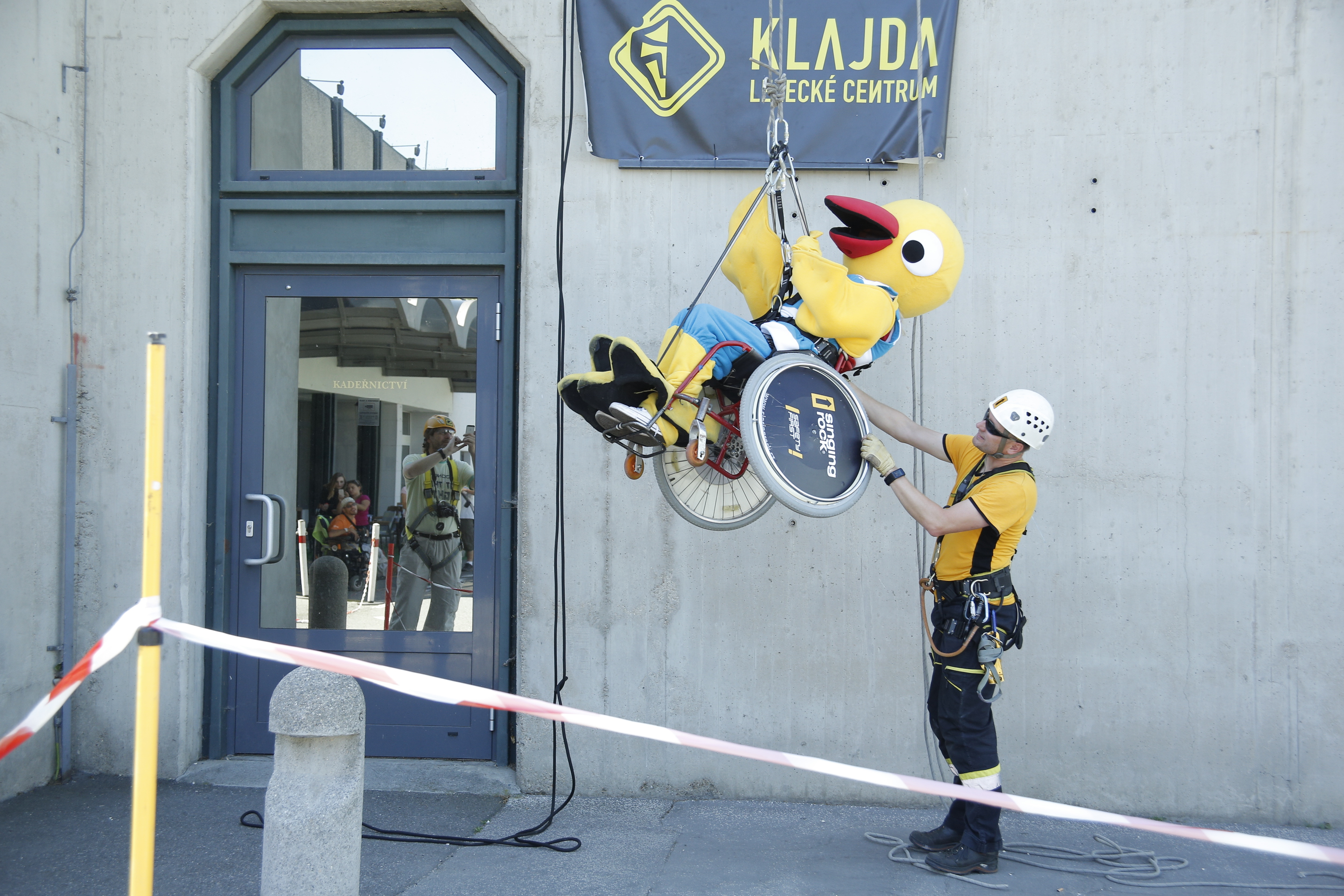 Out-of-the-box activities today offered a very unusual spectacle in the form of wheelchair rope down. Not only the disabled daredevils had the opportunity to sit in the wheelchair, get tied up with ropes, and use the experienced professionals from climbing center Klajda to jump from the roof of the Voroněž's 30-meter building.
The program at Svoboda Square started at 13:00 by the disabled athletes from the Wheelchair Sports Club of Prague, who prepared for visitors the demonstrations of handbike-trenchers, floorball and monoski and allowed those interested to try these sports on their own. In the Radio Krokodyl Arena, the first ever sitting volleyball was presented by athletes from SK Kometa Prague. The paravaulting presentation of JK Fany Hostěnice and dogdancing followed. Another program was directed by the Czech Wheelchair Basketball Association, Paragolf CZDGA and culminated with demonstrations of boccia with expert comment by Radka Procházka. The double Paralympic medalist during the game gave his experience to the medalists Emil Open.

On Saturday, June 10, the participants are awaiting the last day, during which they are scheduled to accompany their activities. They can enjoy a visit to the VIDA observatory or park, a zoo or sailing on the Brno dam.